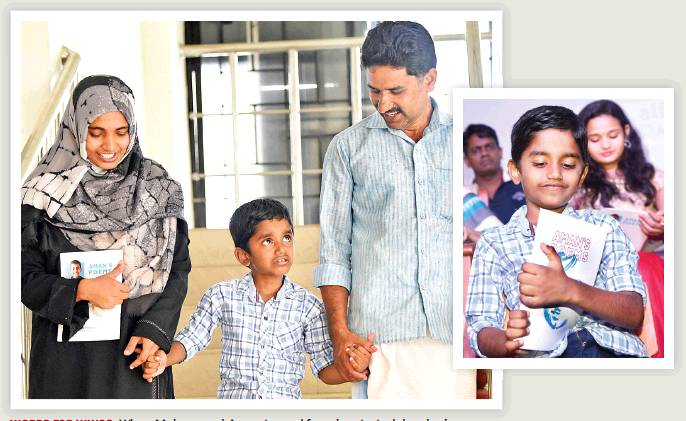 All Rhyme & All The More Jipson Sikhera Reason

The poems are all short, and there are only 11 of them – a few are repetition of a single sentiment, like in Girl, as though he were conjuring the object of his desire (if that’s the right word) into being, a couple are in bold, demanding all-caps while some have a sense of irony that, given Aman’s condition, at first appears incredulous.

But when you see him in person, a frail-looking seven-year-old with large, inquisitive eyes and see the inner intent and intelligence they radiate, you know you have to grant it to him – Muhammad Aman, an autistic child is, yes, something of a prodigy.

When Muhammad Aman turned four, he started developing a strange attachment to English, say his parents Shameer and Naseera.
Sample this: And as I tried to look deeper / It is harder to see who I am / Suddenly I realized, I am not that person anymore / Can somebody change like this?

But never know why and never know how? Lines that are very adult and accomplished.

Aman, a Class II student, was diagnosed with autism at the age of two and a half years but that did not stop him from doing what he loves to do the most – typing out poems on his tablet, poems on the beauty of nature, about people he has met in life as well as about a multitude of emotions.

Aman barely speaks, and writing poems obviously gives wings to his thoughts, dreams and feelings. He finds touchscreen tablets more comfortable than pen or pencil. If he wants to communicate something to his father or mother, he ‘writes it on his parent’s palm with his finger – what he is conveying can only be understood by him and his parents.

When asked about autism, Aman doesn’t utter a word, instead he takes his book of poems from his mother’s hand, flips through the pages and brings your attention to the following lines: Thanks to the Almighty/ For his creativity/ For his lovely joke. His face doesn’t reflect any emotion but the irony – and graceful acceptance – of those lines are unmistakable.

He moves his hands across the lines:

Man has his own answers /For all questions/But no answers to autism. When his fingers stop at the last sentence, you detect a tad sadness in his eyes.

“Until Aman turned two, he was like a normal child. But after that we noticed that his interactions with others became noticeably less. There was impairment in his communication. He even used to show great discomfort when we hugged him. He was scared of crowds and was reluctant to make eye contact. We were unaware of the fact that those were autistic traits,” says Shameer Paduvathil, Aman’s father, who works at a printing press based in Eloor near Kochi.

But when they realized what it was, Aman’s parents started intensive therapy for the boy. He also had sensory issues, which they failed to notice in the beginning, that has now been brought under control. “But despite all therapies, there was not much progress in his speech which was a cause of worry for us,” says Naseera, Aman’s mother.

It was a painful experience for both of them when they came to know that he was a non-verbal child with autism but they were determined to provide whatever care and training was required to help their son cope.

When Aman turned four, he started developing a strange attachment to English. “Aman used to stare for hours at English newspapers and magazines which I used to bring home. Eventually he moved to his siblings’ textbooks. First, we thought he was imitating people reading books. But when he started learning to write using augmentative and alternative communication devices like tablets, he surprised everyone by writing meaningful sentences. We still don’t know how he does it,” exclaims Shameer.

But then, as Aman has written in one of his poems, “determination is also a dream”. When asked about his favourite poem, Aman points towards the sky, then drags his fingers across the lines of his poem titled – what else – Sky: When I look at the sky I slide into another world / Every time I go, I wish this will be forever / And once I slide in, I could never comeback ever. A metaphor for escape or for yearning or for transcendence? We will never know. All the same, like the sky, these words resound in their immensity. 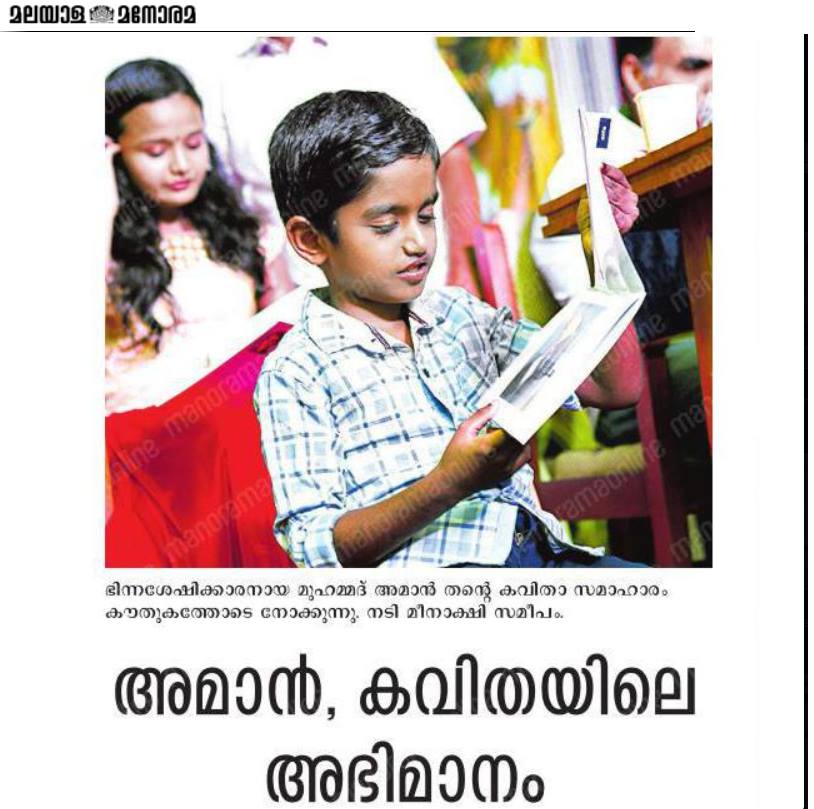 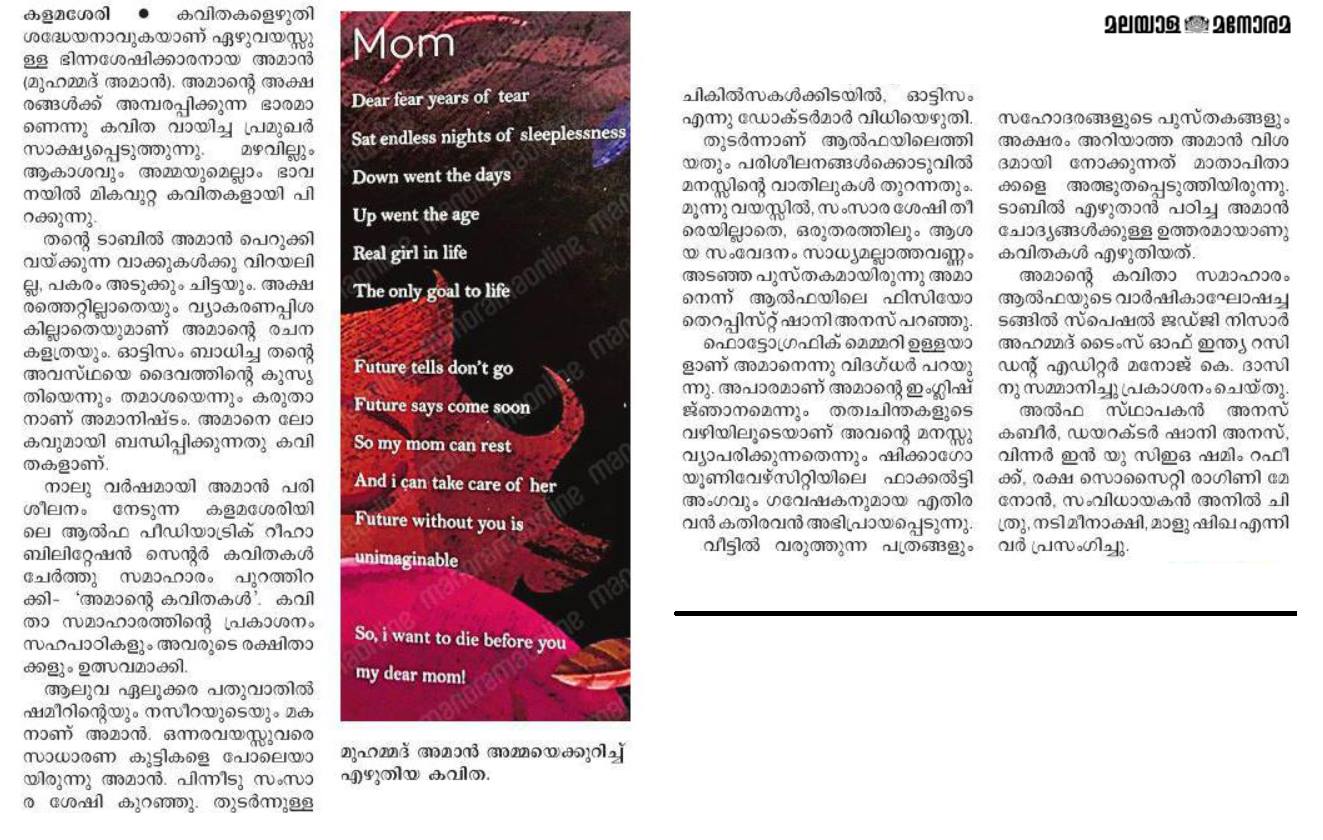 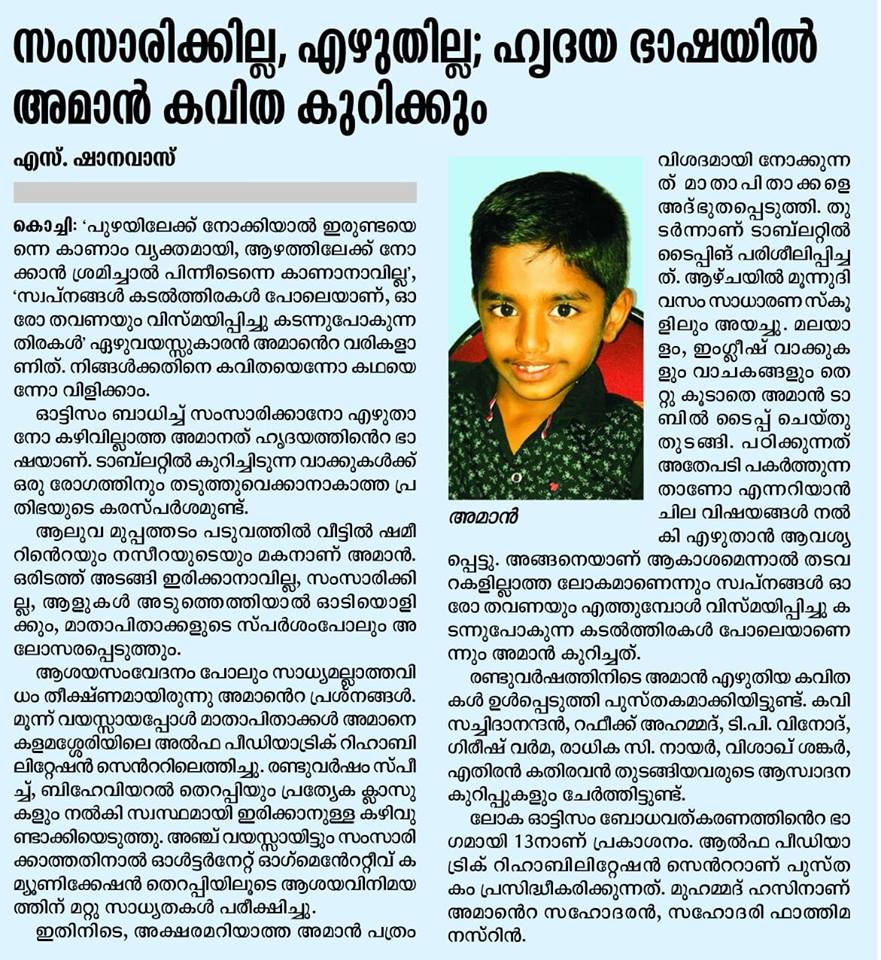 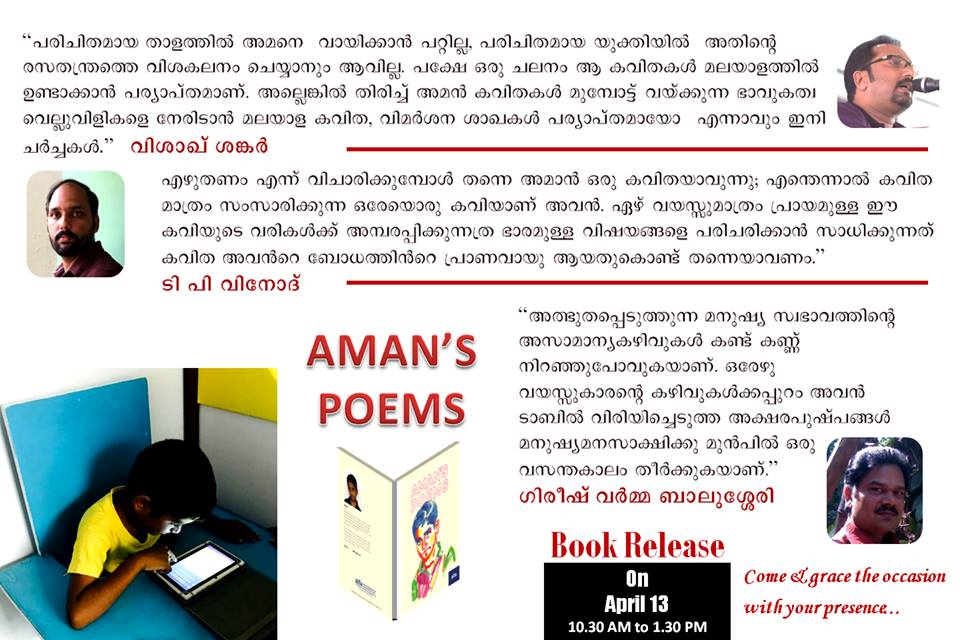 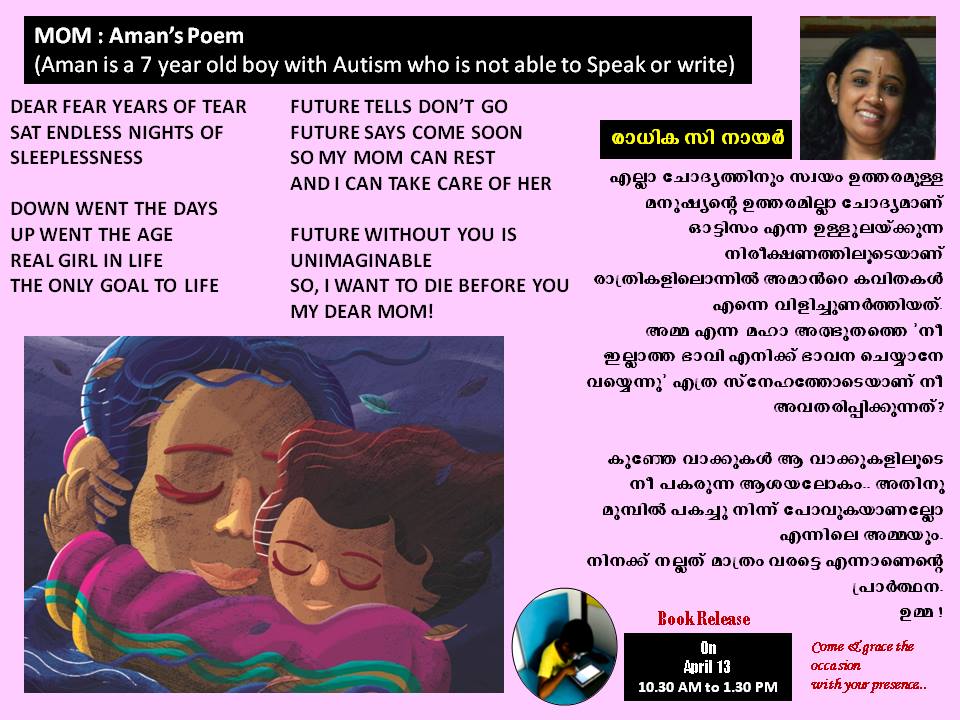 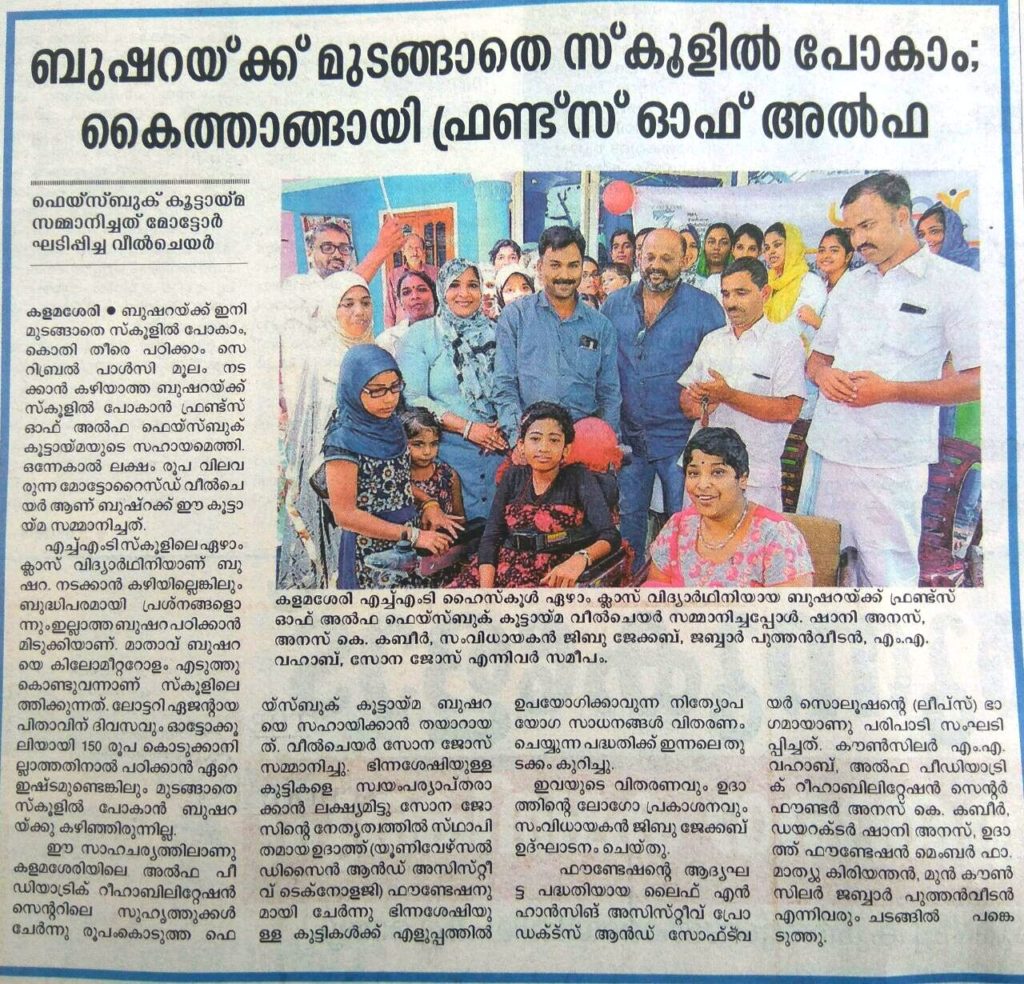 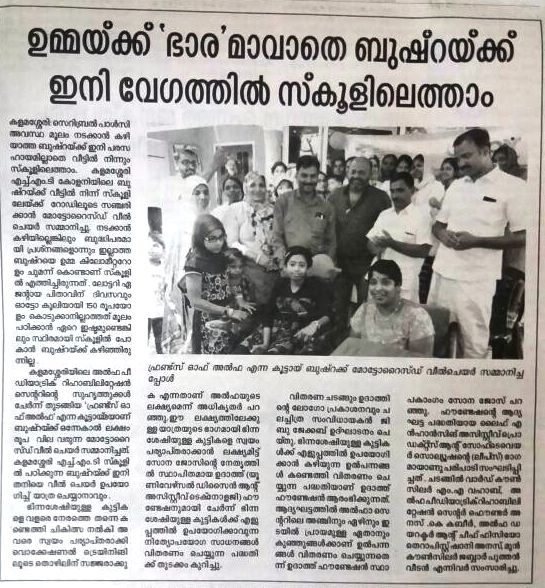 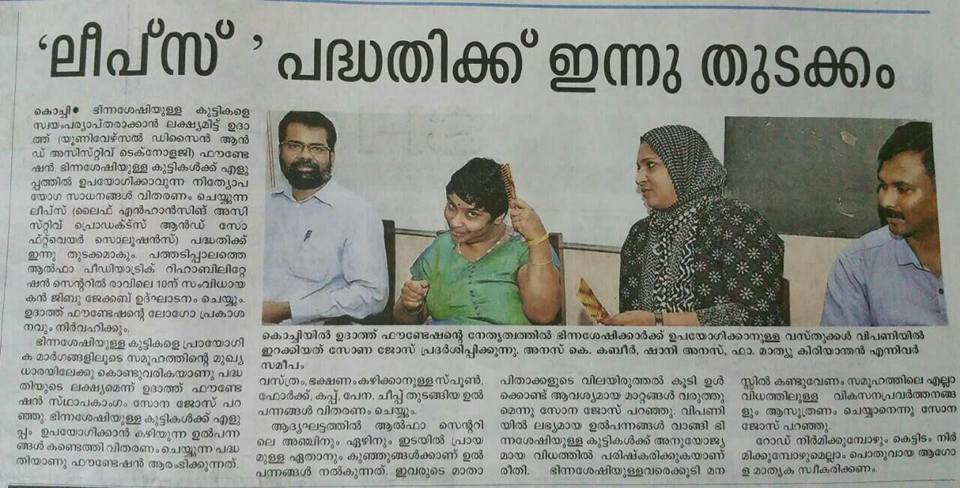 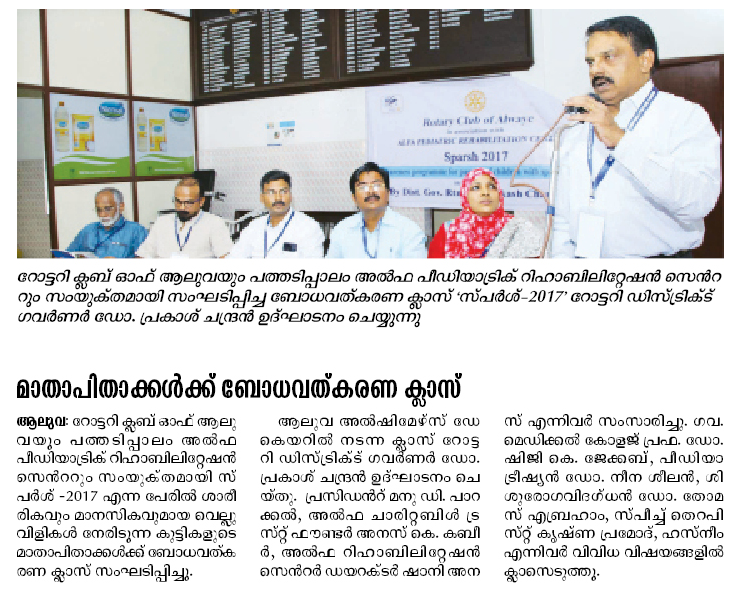 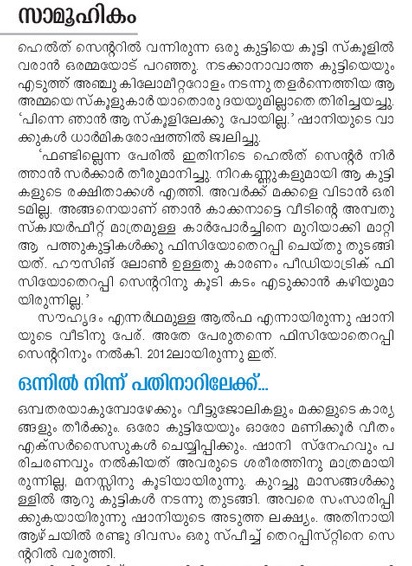 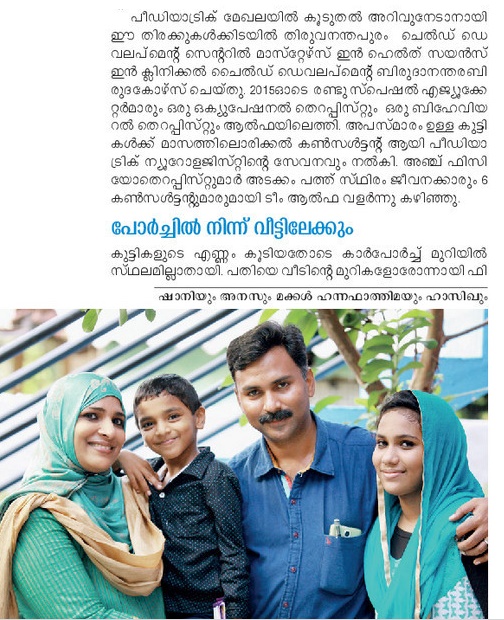 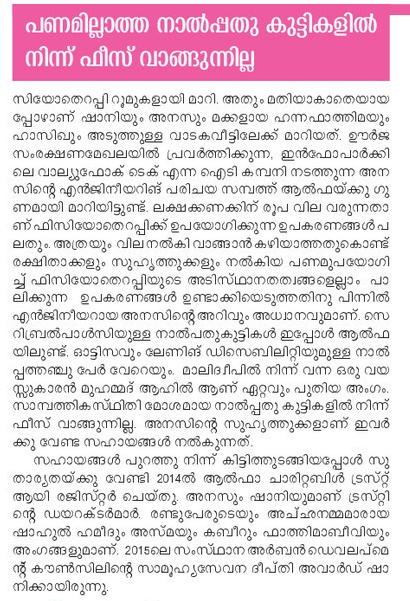 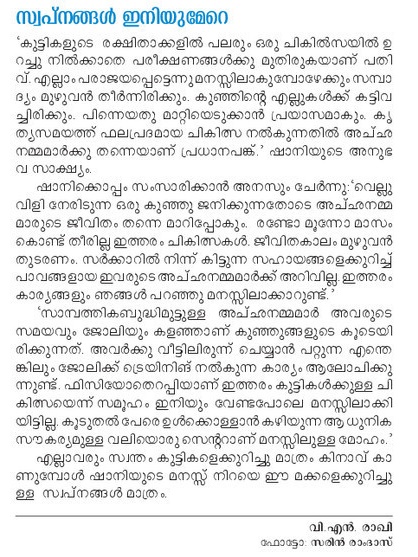